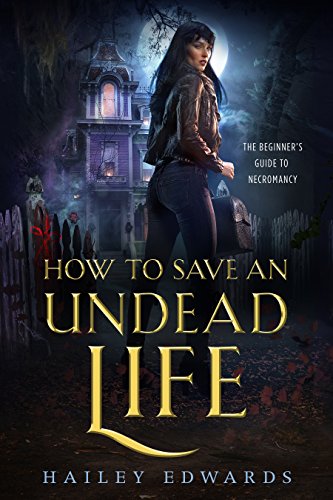 Title- How to Save an Undead Life

Grier Woolworth spends her nights weaving spooky tales of lost souls and tragedies for tourists on the streets of downtown Savannah. Hoop skirt and parasol aside, it’s not a bad gig. The pay is crap, but the tips keep the lights on in her personal haunted mansion and her pantry stocked with ramen.

Life is about as normal as it gets for an ex-necromancer hiding among humans. Until the society that excommunicated Grier offers her a second chance at being more than ordinary. Too bad no one warned her the trouble with being extraordinary is it can get you killed.

Warning: This book contains one ex-con heiress with a pet zombie parakeet who lives next door to her ex-army crush. Brace yourselves, we’re talking more exes than a pirate treasure map here.

Grier Woolworth is hanging on by a string, a very thin string. Her nights are filled with night terrors brought on from her PTSD from her time spent in Atramentous prison. A prison so horrible it makes Alcatraz look like a country club! She spends most of her evenings working as a tour guide on the streets of downtown Savannah and gets paid just enough to keep the light at Woolworth House lit and her stomach barely full.
Little does she know that the world the shunned her is about to come knocking on her door changing everything and then some.
The Sweet-
From the very beginning a soft spot in my heart is formed for Grier. and her haunted house she lovingly calls Wolly. The author is able to create an unbreakable bond between the two without it seeming forced for the sake of the story. I have never read a book where I love a character that isnt;t an actual character but a house, that being said I wish I had a Wolly of my own to call home.
Grier in beautifully broken yet still trys her damnedest to protect the ones that she loves and never gives up when a weaker heroine would. She is smart and pleasantly filled with snark and is only trying to survive in a world that would rather either see her dead or have complete control over her.
The plot itself which may seem slow paced in the beginning as the author is setting the story line and building the world but when it gets full speed it really is fast paced and complex. You as the reader are dragged into the world that Grier is trying so hard to survive and you can not help but route for her and bite your nails as you wait to see if she does just that. Survive.
I have never read any of Edwards previous works and plan on fixing that as soon as possible ( I have gone ahead and downloaded Dead in the Water). The way she so seamlessly creates such deep and dynamic relationships between each of the characters in such a short novel amazes me and I can not wait to see what she does in the next installment of this series.
The Sour-
The beginning of the book can be slow and at time frustrating as the author hints to what Grier”s past could be. There is a push and pulled that at times was a bit confusing. Grier was imprisoned for a crime that even at the end of the book the reader still does not know if she committed it. The reader is left in the dark as to weather or not committed said horrible crime and if she did then why?
That being said I still thoroughly enjoyed the book and will be reading the next one.
Rating-4 out 5 cupcakes.
I would recommend to anyone who loves stories set in paranormal worlds or enjoys a good under dog!

Hailey Edwards writes about questionable applications of otherwise perfectly good magic, the transformative power of love, the family you choose for yourself, and blowing stuff up. Not necessarily all at once. That could get messy. She lives in Alabama with her husband, their daughter, and a herd of dachshunds.